Ok, where was I? Oh I know, yesterday the Long Night of the Museums, with detail.. this time.

The Hackescher Markt Markets are a happening place, set in amongst the restaurants, all sorts of arty craft things, probably not my thing, but Genelle and Mark have a good look around and she finds a pair of linen pants to wear, the jeans have resulted in a rash over her legs, so any excuse to buy something I say, but not to her, and then they head to Alexanderplatz to get their train tickets to Potsdam.

Potsdam is about 24 kms from Berlin centre, and is renowned for the palaces and beatiful buildings. Potsdam was a residence of the Prussian kings and the Kaiser until 1918 ( that ended well for him – you know WW 1). Its planning embodied ideas of the Age of Enlightenment – through a careful balance of architecture and landscape, Potsdam was intended as “a picturesque, pastoral dream” which would remind its residents of their relationship with nature. For me, the knees are good, but the feet and calf muscles are aching so I decide to bail out on a trip out there and take it easy, and start my Museum day at the Art Museum beside the Pergamon and Nues Museum.

I have an easy start to the day, a slow breakfast, a walk through the market at Hackescher, and strange as it might seem I can’t find any jewellery, clothes or street food that suits me. I settle for a coffee and a marzipan and icing pretzel thingy, totally decadent but I feel that caffeine and sugar will help me get through the day, last year I would have had the coffee with 3 codeine and iboprofen tablets, and hobbled away with regular sit downs to keep myself going.

I head to Museum Island, it’s only 5 minutes from Hackescher Markt, to the Art Museum on the banks of the Spree River, but no action, WTF – the sign says ” Air Conditioner has Broken and we are not open until further notice”. Change of plans is now the order of the day, but change to what? I sit in the beautiful gardens amongst some of the sculptures and contemplate what I can do without the gentle hum of the navigator in my ear and the tension of every direction taken being challenged. I’m sure I’ll work something out.

Ok – my plan is now, seeing it’s drizzling rain, is wait for the Lange Nacht Der Museen (Long Night at the Museum) – tough translation that, which costs €18 and you can visit any museum in the 76 museum listed between 6pm and 2am, meanwhile I wander back Hackescher Markt way and wander in the drizzling rain around the alleys and and old buildings. I then get the train into Freidrichstrasser then Potsdamer Place, get my ticket for tonight at the Espionage Museum, my first planned museum. I have about 7 marked.

I’ve checked with Genelle, her and Mark are lined up at a palace and won’t be back in Berlin until about 6.30, but Mark would like to see the Espionage Museum. This is right near the Mall of Berlin, an extra large shopping centre, a brief interlude watching some professional dancers, a coffee and a waffle at a cafe, and by then I’ve had enough of the shopping centre.

Genelle and Mark have had a good day, but their feet are sore, they’ve walked all day and are exhausted and after Mark checks out the museum he’s decided that he’s had enough for the day. The Espionage Museum is great but it’s crowded, there is masses of stuff, real spy stuff from the Americans, the Brits, the East Germans and the Russians. We catch the trains back to Hackescher, via Hauptbahnof, the navigator decided against advice to take a train – which ended up being the right train but going the wrong way. Never the less she feels it was justified as we get the tickets for the train trip to Amsterdam out of the machine, Mark and I stay quiet, preferring not to poke the tiger.

Back at Hackescher we have a beautiful dinner in the restaurant area and they head back to the apartment, I head to the Altes Museum on Museum Island, on foot.

the Altes Museum is Berlin’s oldest museum, lots of Roman, Etruscan, Greek artifacts, lots of stuff. It’s quite late at night, the crowds are building, I get the M5 tram up the the Naturkunde Museum ( Natural History Museum). It’s packed but as it’s an enormous building the crowd is spread out. I get back about 12.30 am ( is that what I said yesterday?),exhausted, my eyes can’t focus, I’m dusted

Tomorrow is a bit of a freelance day, more about that tomorrow.

The picture below is a Leunig cartoon I liked – not sure how to attribute him? 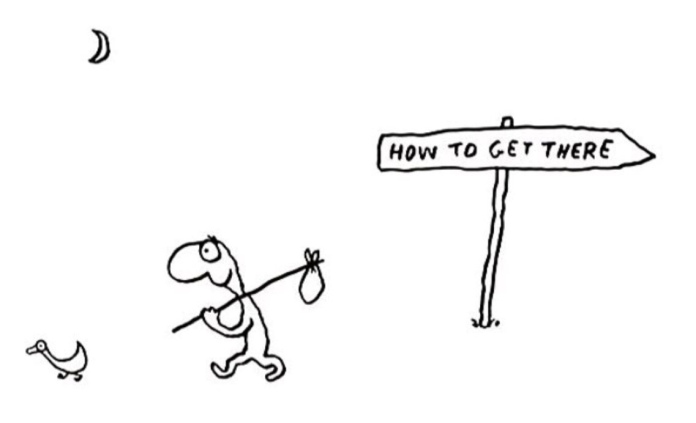