Today is cooler, a bit foggy and the early morning sees few people on the streets. Breakfast is the usual healthy stuff then we head out into the mid morning mist across Charles Bridge, already teaming with tour groups heading up to Prague Castle. The view to the bridges either side of Charles is that grey low light misty look of Autumn that suits colour blind people like me, it’s greys, other shades of grey, white and black and nobody can give me a bollocking regarding what colour I see.

We drop some of Tim’s ashes into the Vlatava River from Charles Bridge, there are bits of his ashes spread around the world, places I’m sure he would have travelled to and explored if he could have, so this time he’s doing in spirit with us.

It’s slow going against the flow and when we eventually get to the old town side we turn left and head to the Jewish Quarter. There are less people than in the main areas, but probably less to see as well.

The Jewish cemetery is packed and the synagogue is very busy so we look at it externally and wander the streets back to the centre of old Prague, it is so bloody busy and ts nearly November, really strange I thought most of the tourists would be gone by now.﻿

We venture past the Sex Machine Museum, have you ever heard or a weirder Museum? Actually, that reminds me that Alison and Dave visited the Museum of BRoken Relationships in Zagreb last week (that’s true!!!)

Genelle at the Sex Machines Museum

A light lunch of honey cake, coffee and hot chocolate at The Grand Orient Cafe is next on the list, Salvador Dahli and his cubist style dominate this up market cafe, the design of the building, the banisters on the stairs all scream cubism and Dahli ( do you honestly think I would know this? Our guide told us this the other day). Although I confess that I’ve seen a bit of Dahli’s work at the Pompidou Centre in Paris and the Peggy Guggenheim in Venice and I don’t mind him although Jackson Polack is my favourite artist, I think anyway. Anyway, back to the food, the honey cake is a specialty of this part of the world, it’s thin layers of sponge, cream, honey and a nutty mix, delicious!

Paul at the Grand Cafe Orient

﻿Genelle stocks up a few more Christmas items from the crafts people on the Charles Bridge on the way back to the Castle side( where we are staying), they are all licensed and their prices are controlled and are authentic Czech handicrafts. ﻿

At about 4 we met up with Deb and Tony, the Adelaidians, for a beer coffee etc etc and a yarn, then dinner at the same restaurant as we ate last night. The food and the prices are good but the grumpy waitress hits us up got a tip when the bill is paid even though it’s clearly included on the bill we paid, so I’m outvoted about the action we are going to take and we pay NO tip and leave. I think we’re all feeling a little weary, I know my knee and legs and back are killing me, so it’s time for an early retirement. We say goodbye in lightly misting rain, hope to catch up again some day in the future and then go our ways, them to Budapest tomorrow and us to Vienna, one of the great pleasures of travel is meeting new, interesting and nice people from all parts of the Edit﻿world.

Tomorrow afternoon we leave by train for Vienna 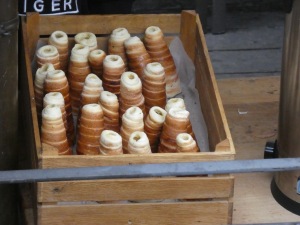 Trdlos – a local dessert favourite but not our favourite

Genelle having a cubist hot chocolate 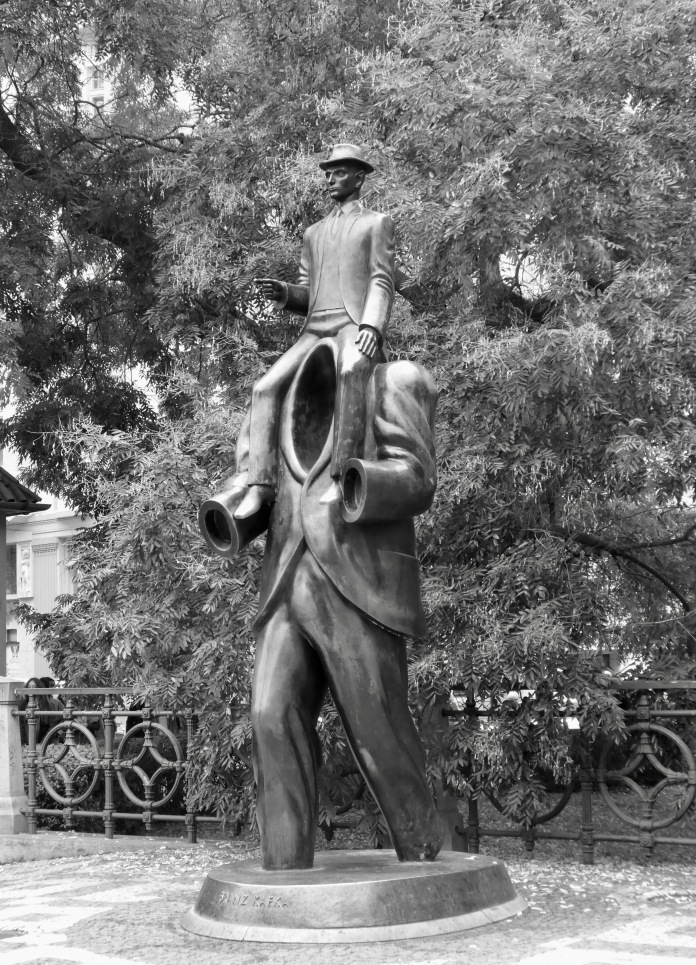