It’s a late start again this morning. Breakfast is the usual healthy start, then Genelle makes a couple of phone calls back home using the free wifi. Free wifi is almost a must these days, you hardly need a mobile phone to call home, what you a smart phone for is the data so that you can use Google maps to get you places, the 2 hotels that we’ve stayed in that have the “Handy “phones in the rooms and you can use them locally for data like Google maps while you are walking the streets or working out public transport! as well as international calls are certainly on to a winner for travellers in an unfamiliar city.

We head out and go our own ways, Genelle to look at some other options for shopping and me to walk up towards the castle and the plan is to meet again at the hotel at 12 midday and check out then go again prior to our taxi arriving at 1.45pm at the hotel.

The day is gray, not too cold, not raining, a light fog over the river and the city, the tourists are treating across Charles Bridge to the castle and lots of school kids mixed , on excursions I guess. Not a bad spot for an excursion!

We reconvene at Pod Vezi Hotel at 1.45, our taxi is on time. The hotel organise a taxi to the train station for 350 Kr’s (Czech Crowns) which is about $16,pretty reasonable we think and the price is locked in and we don’t have to negotiate with taxi drivers, we know the rate is ok. Our man gets us to Pragaue Hlavni Train Station in about 20 minutes, in plenty of time as our train doesn’t leave until 2.52pm. The trick is working out which platform, there are 6 platforms with options a,b, s, and f. As out Tain eventually comes on the board, 4 S, we make our way to Platform 4, an old bloke is very helpful and gives us directions but he seems a bit too helpful really, hanging around like a bad smell, and then it falls into place when the train arrives and he rushes to help Genelle on with her bag then asks for €2, which I give him so he’ll piss off. I suppose he was helpful and gave us a bit of confidence we were in the right area and getting on the right train.

We’re on Train 79, travelling from Graz to Vienna, or maybe its to Graz via Prague and Vienna, dunno really but I know it’s going to Vienna and we’re on the right train. We’e going via Brno where they make the rifles’ that’s the only other name that rings a bell on the rail line we’re going on. Other names of the towns we are stopping at are Ceska ﻿Trbova, Havlickuv, Breclav, Sessenbrunn, Erzherzon head South East out of Prague through rolling hills, corn being harvested, ploughed paddocks, small villages, it’s green and looks like it’s productive country. It looks like the maximum speed is about 120 to 140 km per hour.﻿

Travelling by rail is easy, and it’s relaxing once you have the right platform and train identified and are actually on the way with bags stowed. There is plenty of space to move around, you always arrive right in the centre of the place you want to go to and in Europe they are fast, go just about everywhere, and are comfortable and readable priced. Although saying that, we find out our train is running 33 minutes late when we get to Brno. Line problems is what we think we heard in Czech and hard to understand English. The carriage is full of locals and I don’t hear a word of English spoken the whole trip except for the conductors fractured English telling us the train is behind time. Mostly it’s Eastern European languages being spoken, not sure what ones but I guess Czech, Russian, and all have a distinctly Russian ring to them, not like the exactness of German or the machine gun sound of Italian.

We come into Vienna, it’s modern looking but as with any entry into a city via the train lines it’s hard to tell really what it’s like.﻿

Off the train at Wien (Vienna) Hauptbahnof, our taxi we booked in Prague is there to meet us, a black Mercedes van, sort of MI6 or CIA look about it, and for €21 it’s worth every Euro, we would never have found Pension Nossek our funky little hotel right in the middle of the name brand area of town. I can tell Genelle doesn’t like it when she says “Well, I would never have picked this place!”, but the young guy on the desk is great, it’s an old building but a nice big room, good bathroom and in the centre of the old part of the city, hopefully after a good sleep and she’ll see it differently, I think she’s a bit weary.

We drop our bags in the room and go walking, a) for something to eat, b) some fresh air, c) let Genelle see some shops, it might lift her spirits. We find a little French cafe and have a nice meal, a coffee and hot chocolate and then walk the streets of Vienna reconoitering the shops – but this area is mostly Hugo Boss, Versace, Tag and Rolex watches so I figure I might be on a loser with that too. In future I’ll let her do all the accomodation.﻿

Time to get some sleep, tomorrow morning is a late breakfast then after lunch we’re doing a Segway tour of Vienna. It will be interesting to see if Genelle can get the Segway airborne like her car in our driveway at home in Dubbo. 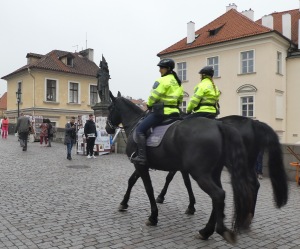 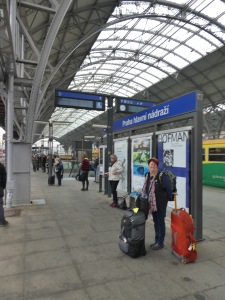 2 thoughts on “Day 19 – Prague morning then to Vienna for the evening.”