Farrrrk, 3.30am is early to be getting out of bed, it’s ok it you’re just going to bed and you’re under 30 I suppose.

Genelle has the auto alarm clock on and is out of bed before the alarm proper goes off at 3.30, I try and sneak a few extra minutes while she’s in the shower but it doesn’t help me feel any better. And here’s me with a reputation for early starts!

At 4am we’re out the front door and the black Mercedes taxi is waiting for us. He’s a Bosnian man with little English but enough that we can have a conversation and know that he has relatives in Sydney. The trip to the airport at 4 am takes 1/2 an hour and we’re quickly rid of our bags thanks to the helpful Austrian Airline’s desk and through security after half undressing, luckily the extra kilos I’ve added help keep my jeans up and I don’t have to waddle through the metal detector with my pants around my ankles. A bottle of water, a muffin and coffee make my feel half human.﻿

At 6am, the Eurowings attendant takes the tapes off the boarding gates and the stampede begins, but it’s only downstairs to a bus where we then wait until 6.20 while the stragglers and other dozy buggers how spelt through their alarms wander down the stairs yawning, wiping the sleep from their eyes and no apologetic shrug of the shoulders or tilt of the head  to say sorry for holding you up folks. The bus is finally off, it seems to take forever to get to the plane, we’ve driven half way to Nuremberg by the time we arrive at the plane, dismount the bus and find our seats on the plane. Thankfully it’s only about half full so we don’t have to sit next to some fat German pig farmer smelling of garlic and pig shit. It’s still drizzling and cold as we head south to Rome, daylight sneaking over the horizon on the left side of the plane when we finally get through the clouds.

Rome not far away

We’re tired, a bit grumpy and testy when we get off the plane Fumicino airport in Rome.

The bags arrive despite a bit of doubt by one traveller that carousel 11 was where they were going. Out the doors and we see a bloke with our name on it. We assume he’s the bloke we booked on the net but we latter find out the accomodation organised this one and we ended up having to pay the trip into Rome twice – €50 f…k up, I think we were mucked up by the accomodation people assuming we wanted transport.
Mamas Home Rome in Campo de Fiori is fantastic, in a fantastic piazza, just near Piazza Navona, near the Jewish area. The accomodation has been really modernised and has hand made modern furniture made of brushed stainless steel and glass, the shower and bathroom is all glass and is all seeing unless you pull a curtain for a little modesty. Our room is at the side not overlooking the Campo, but is still a beautiful room. Our initial host is Enrica, a late 30-40 something daughter in law of the “ Mama” who owns the building, “Mama”has 2 sons and we gather both are involved in this enterprise and we think a restaurant downstairs. Enrica is mother to 2 boys of 7 and 11, well dressed, confident, full of knowledge on the building and the area, I think Mama’s son has done pretty well.
Campo de Fiori was once a garden area on the banks of the Tiber River and at some stage hundreds of years ago some of the gardeners started selling flowers (Fiori) in the area and now while the piazza fills with food and clothing markets during the day, the 4 flowers stalls are the main permanent stalls.

Enrica takes over to Obica Cafe for some breakfast and coffee, where the “breakfast” bit of B & B happens. It’s good to get Italian coffee again. There is an easy feel to the cafes and staff when you sit down in an Italian cafe/ restaurant.

Genelle finished her breakfast quickly and immediately buys some clothes and does a recce of the market.

Back in Berlin I lost a cap that I’d bought in Paris, so I bought hats at a market stall in Campo de Fiori last year and decide to replace it at the same stall. A nice line cap is the go and it’s cooler than the woollen ones I was thinking of. It’s a warm sunny day in Rome and I need to cover my head so a necessary purchase. My acquisitions other than food and drink have been 2 pairs of jeans, 2 pairs of work trousers, 4 fridge magnets and a couple of caps. My travelling companion has, as somebody commented, helped the European economy with her purchases, my reply was Europe was doing ok but the Reid’s were facing a serious deficit.

Genelle buys a bag in a laneway beside Mamas Home, a pair of shoes in the Jewish Quarter, scarves, more bags, dunno when it’s going to end and where she’ll fit it all? Probably stuff my bag full of it ( which is what happens.

We then walk to Piazza Navona, 5 minutes from Campo, sit a while and rest. The crowds are huge, much bigger than when we were in Rome last year ( November). We then walk the next 5 minutes through the crowds via the laneways to The Pantheon, my favourite building of anywhere at this stage. No photo’s do it justice, you have to see it to understand, the ocular in the roof is enormous but how they managed the engineering of the roof over 2,000 years ago is fascinating. There is a bloke that we saw here last year, busking, playing Pink Floyd music on an electric guitar with and amp and speaker connected to a car battery, he’s amazingly good. We then walk the further 15 minutes to Trevi Fountain to do the coin toss ( means you’ll be back) which has worked for us 3 times so far. Our feet are killing us so we limp back towards Campo de Firori for a rest.

After going our own way for an hour or so we meet at a restaurant Osteria Fortunata which is right under our room at ground level, we were told it’s authentic and the pasta is renowned. It’s a bit early so we get straight in, there are 2 female cooks making pasta at a large table in the front window, fast, all sorted of pasta, fetuchinni, spaghetti, gnocchi, macaroni, and other stuff, flour is flying and they talk and laugh with the waiters as they come past. The place is busy, the waiters skid around corners, there is the incessant noise of a busy chatty restaurant with the machine gun patter of Italian added. It’s a fun place and the food when we get it is good, Genelle cleans here plate, and that doesn’t happen often.

Then it’s a final pack ready for planes again tomorrow.

Our room at Mammas Home Rome in Campo de Fiori 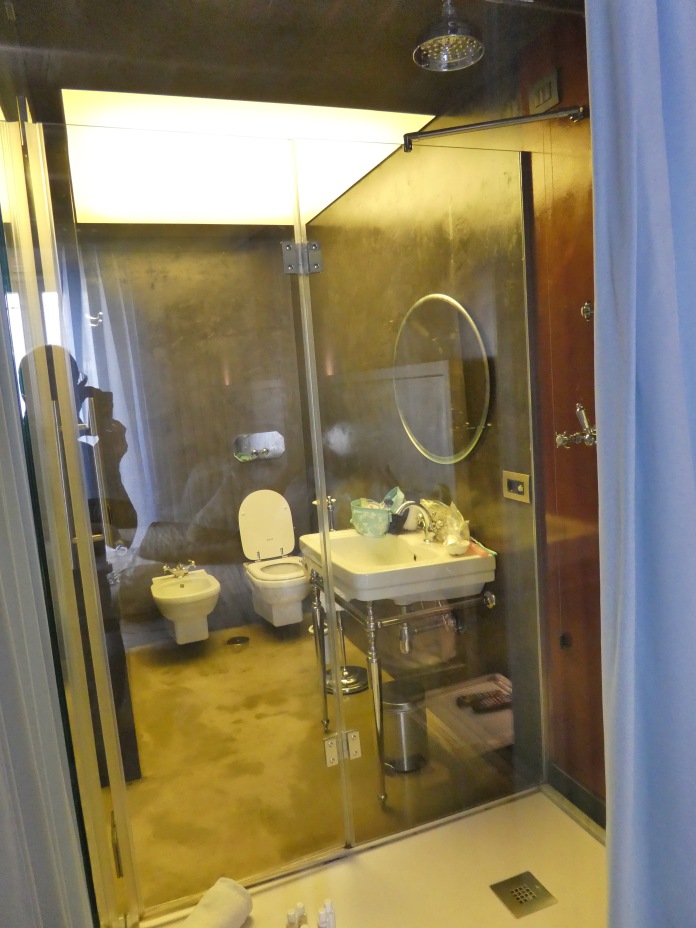 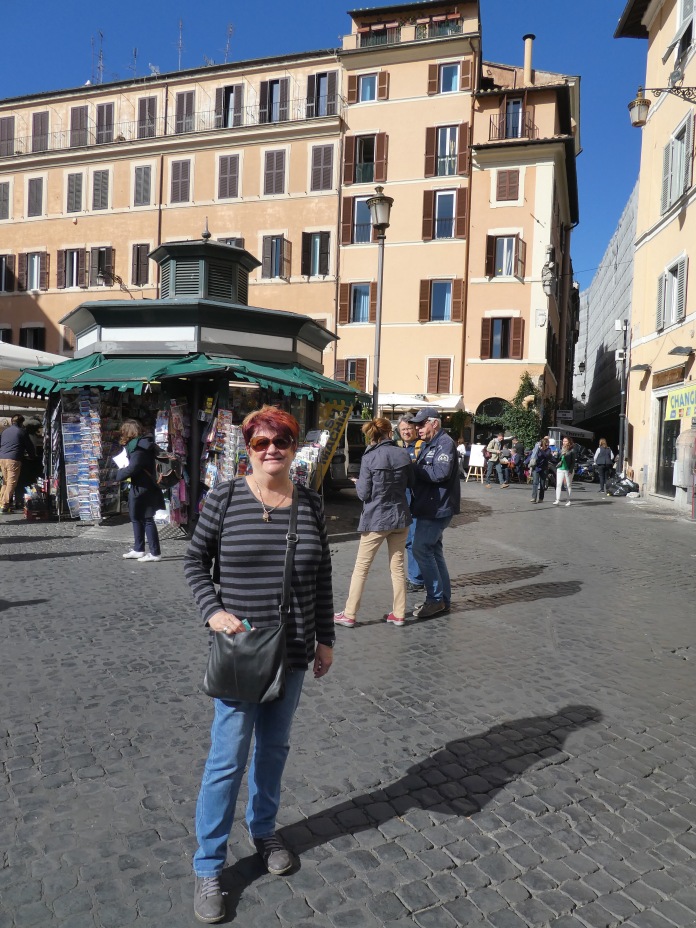 In front f Mammas Home Rome, our room is 2nd top floor near the chimney.

Singers in front of our B&B 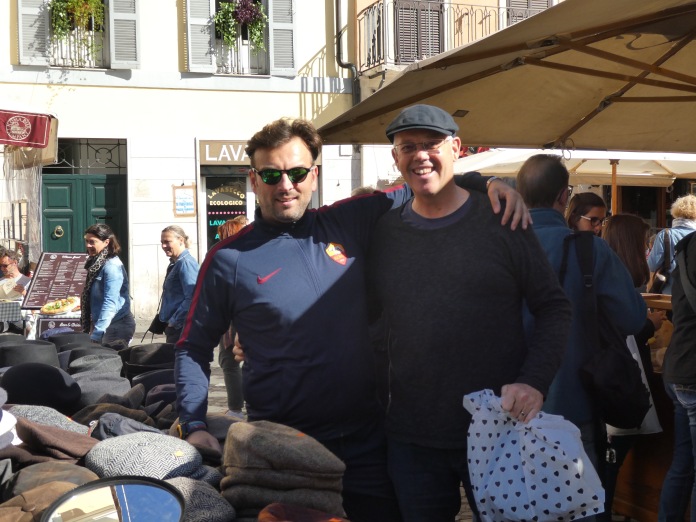 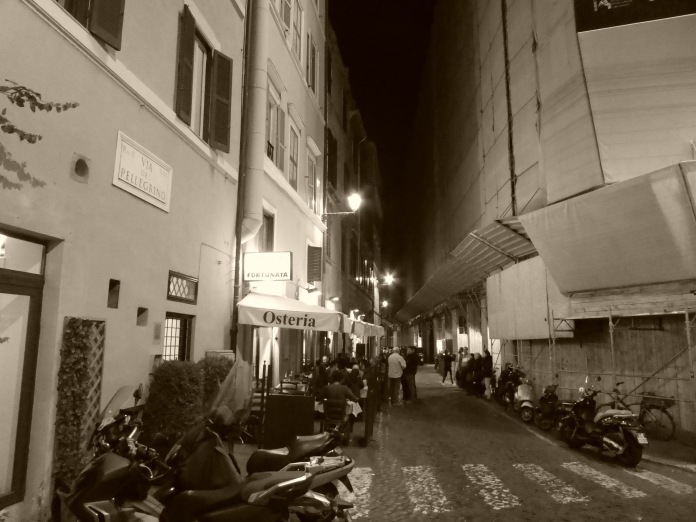 Osteria Fortunata after we ate there

Me at Osteria Fortunata

Best building in the world – Pantheon

Paul in the Jewish Quarter Rome

Street scene in the Jewish Quarter