Breakfast in the Holiday Inn is bedlam at 6.30, it’s chock a block, hardly any seats, and the food is pretty average. But it’s fuel for the day so I shovel a bit in.

Today’s program is a big one, we start with the Maglev train ride, 30 km is 7 minutes at a top speed of 430 km/ hour, 2nd the Bund – an area on the river on the old side of the city that looks over to the new centre of Shanghai, 3rd is Shanghai Museum, 4th is a 1/2 day tour of the city and 5th is an evening boat ride on the river to see the city at night. I weary just thinking about this!

The drive to the train is through the heart of Shanghai, we see all the landmark buildings, the massive bridges, the sea of sky scrapers with a few bits of the old Shanghai in between the new.

The Maglev train is an experimental train, there are 2 of them, it has no rails and it levitates and rides on a magnetic field, and I’m assuming it’s very expensive because there aren’t any others like it. It’s super fast, and gets to top speed of 430 km/ hour in a bit over 3 minutes, it takes 7 minutes to get to its destination 30 km away. When it’s slowing down 300 km/hour feels like it’s a canter and 160km/hour feels like you could walk beside it. When the train going the other way passes it’s like a gun going off, 2 trains at 430k makes for an 860kph effect when the meet. It was phenomenal.

The heart is still pounding when we head to the Bund and walk along the river on the old side looking over to the new side of Shanghai. The buildings are spectacular feats of engineering and design, the “Bottle Opener” is particularly interesting. Coffee and a snack before we head to the Shanghai Museum. All travellers are behaving so far, can’t really have a shot at anyone yet.

The Museum is interesting, we aren’t there all that long but the best part for me was the jade exhibition, some pieces from 2000 bc. The Chinese furniture from the Ming Dynasty period – about year 1300 for a few hundred years was good as well. The obligatory fridge magnet was purchased for 15yuan ($3)

Then it’s on the the French Quarter where few of the old buildings remain, we go to an area some are still standing and have been renovated and are full of funky expensive food operations and name brand outlets. Ironically it’s also the area where the original Chinese Communist Party headquarters was located. On a walk I find a film shoot going on, lots of people in red army uniforms singing a song and waving red flags – a director with the megaphone yelling “cut” or whatever the Chinese word for it is. 2 Paul’s from the trip don’t move from a bar and consume copious amounts of German beer, it is a warm day after all.

We then end up in and old market area, very traditional Chinese architecture, the Navigator is dribbling in anticipation of the shopping, but in the end doesn’t buy much at all. I buy a green tea and some Chinese bean cake and watch the seething crowd below. So many Australians in China, and they all look alike, I don’t know how the Chinese stand it!

A short trip to the British area, food, beer and conversation are the order of the day, we’re all getting a bit weary and it’s around 5pm

The night river cruise is more than I thought it was going to be when I saw the heaving mass getting on to the boat. The crowd spread out fairly well over the 3 decks, and I reckon I’m correct in saying that the Shanghai night time sky is spectacular – every night, not just special occasions like Sydney’s Vivid.

We get off the boat letting the rushing locals go ahead, they all clearly had somewhere to go that was more important than what we had on.

The Electrician and I head out for dumplings for dinner, as well as picking up our new glasses ( ones for the eyes). The dumplings are good, the service is a bit average, I think we arrived right on closing time.

Tomorrow we’re off early to catch the bullet train to Zhengzhou in central western China, 1500km in 5 hours. 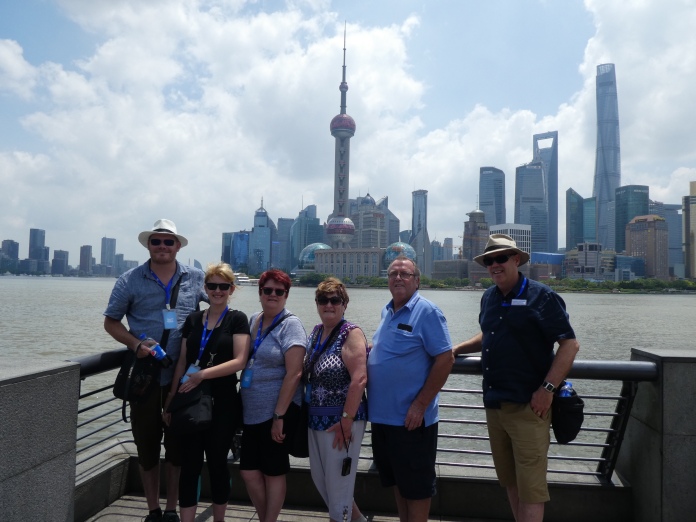