I have mentioned this in previous blogs, but, listen up, I’m related to the Queen via my mother’s blood line, or more to the point the Lyon family, via the Bowes-Lyon connection, I’m not sure what number I am in the line to take the crown if there are a few “accidents” but I’m pretty sure that I’m a long way from getting a phone call to see if I need any training for the job. But, no bull, I have the family history links way back and it’s true, perhaps when the Lyon family married into families with convict history we had the pencil put through our names, I dunno?

So we’re a little late out of the barriers this morning, a good sleep-in has done us all well, and an eat in breakfast of toast and Weatabix washed down with a strong cup of tea and not pastries is good for the waist line I reckon. I put washing on last night but when I returned home the washing machine had all lights off and I couldn’t open the door, I guessed that I may have hot a wrong button but the repair man confirms it was the plug, phew for that I say. We head out to Earls Court Tube Station, take the District line to Richmond, then buy. £6 each return ticket to Windsor, we go past the famous Twickenham Stadium and I dream of going to a rugby test match there at some time, my guess is that might never happen now.

The country looks dry, for England, it’s obviously been a hot dry summer. As we approach Windsor/Eaton Riverside Station, the imposing bastion of the castle sits grandly on the hill out to the left of the train station, a commanding position strategically and clearly it’s easy to understand why the monarchy consider this place their home. It’s pretty fantastic.

We wander the 400 metres or so up the hill, past the MacDonalds and KFC’s and other food franchises and souvenir shops sitting just outside the castle gates, sort of a bit offputting really. And then when you get inside the gates and it’s a lot different, the history of the Royal Garter, St George’s Cathedral, the monarchs buried here like Henry VIII and Jane Seymour, the paintings by Titian and other masters, the portrait of Edward the Second with the giant battle sword that’s over 700 years old hanging beside the portrait. Edward II is not buried here, he’s in Gloucester, but he has a reputation for being his fathers biggest mistake, he was gay, didn’t produce an heir, lost a few battles and one versions says he was executed by a red hot poker up the wazoo. My eyes are watering! This is a question that may never be answered. Any historians out there, feel free to add or correct me.

The collection of armory from over the centuries, the St George’s Hall where all the Knights of the Garter are listed, the restored area nearly destroyed by the fire in the early ’90s is all magnificent and I’m glad I made the effort to go and see it again. As we leave the Royal Apartment area, Genelle and Mark are nearly run over by 2 of the Royal Guards marching down the hill. I hear a loud yell ” Make way for the guard! I see Mark and Genelle step aside not sure what is happening and then they see the 2 guardsmen bearing down on them, wonder if they have bullets in those guns!

We’re done with the castle about 2.30 and head back down to the train station after a light lunch, we deter via the Thames bridge and manage to see some ducks and a few f….g swans ( in joke – forgive the pseudo swear word!).

We’re back at Earls Court about 4.30 and wander up to Kensington High Street, Mark books himself a cut and shave by a real men’s barber shop Kensington Barbers on Friday morning. No clippers or safety razors here, they use scissors and cut throat razors, I think of reciting the Man from Ironbark to Mark but resist, I don’t think he’d see it as remotely funny.

The Navigator is getting a whingey, I suspect sore feet and tiredness, so the slow lope along the Kensington shopping area and then back the short distance to Gloucester Road doesn’t result in smiles on her face. The closer we get to our apartment the slower she gets, with a gait like a busted crow she hobbles through the front door and collapses on the lounge feebly asking for a cup of tea. After a cup of tea she heads for a calming bath while a Heineken soothes and settles my nerves. Despite an offer to cook the Sainsbury’s ready prepared dinner, I’m still not in the good books, I left the plastic on the foil container. But, thankfully golden boy Mark picks up on my blue and gets the job sorted before damage is done.

A cup of tea and a biscuit after dinner is helpful.

Tomorrow – Mark and Genelle are heading to Bath and Stonehenge at about 8.30 and I’m going to the Imperial War Museum, there’s an 11 am tour I’m planning to take and then I may come back to the National Gallery at Trafalgar Square, it’s a place I like to wander with no time restrictions and museums are not something the Navigator has one bit of interest in, so I’ll move at my pace today, fast on the street, slow on the looking and soaking up.

Photos – 1. I liked the shoe and sock of the bloke on the train

2. Windsor Tower – see the plane about to hit it

3. Outside our flat in fashionable Chelsea, right near Kensington & Earls Court. 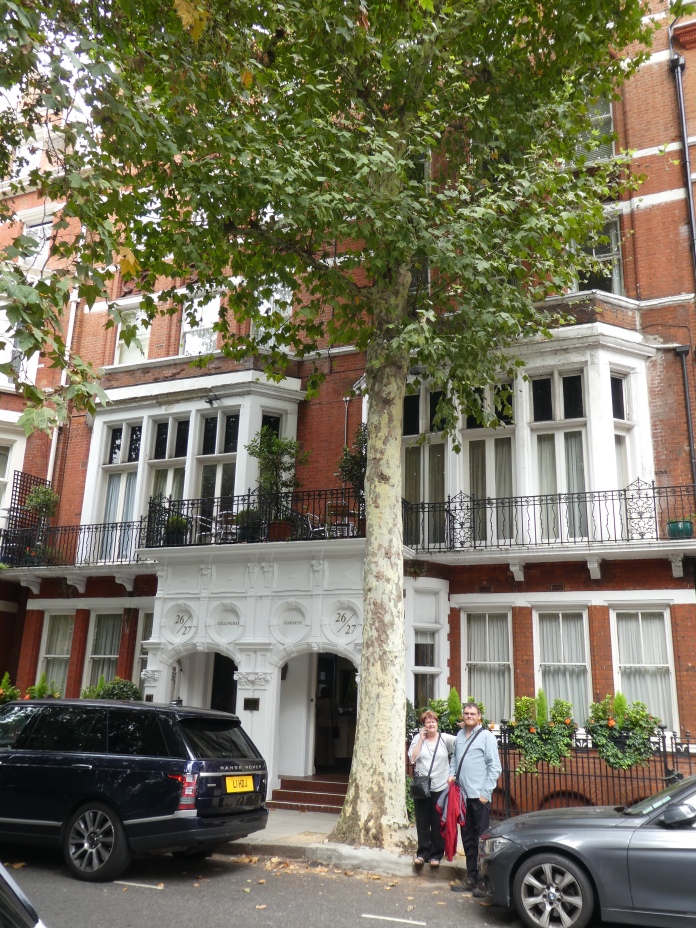