The day is pleasant, and it’s probably going to be warmer as the sun moves west. We have the €7 breakfast at the hotel to get the day started.

An interesting thing, last night we met one of neighbours on level 5, his/her name is Dianne, she or he’s taller than me, I reckon 6’3″ maybe, he’s decked out nicely, hair done nicely with lippy on, I squeeze in the tiny lift with Diane and there’s no issues, so at breakfast I acknowledge her and say ” morning…..Diane” and feel ok with that. Diane is from Chicago.

The Navigator and Mark head of on their Bikeabout cycling tour of Paris at 10am. I leave them at Charlemagne’s statue outside Notre Dame and wander the streets up to Rue de Rivoli, back over to Saint Michele, where I catch Mark at the rear of the group riding, he didn’t see me as the crowds were building.

I have a coffee at a sidewalk cafe, do a bit of crowd watching, some might say perving, but it’s all innocent, it really is. And how can you resist watching all the beautiful people on a late summer day in Paris?

I finally meet up with the cyclists. The news is not that flash, the Navigator had a crash before their trip actually started, apparently she put her bag in the basket, but it was too heavy and sitting on one side it directed her into the curb and she came down on her hand and leg. Fancy that, Genelle’s bag being too heavy! Anyway Mark said he was the first at the scene of the accident, and saved her from further damage and embarrassment, and kept himself in the will. Of course she was not at fault, it was the bags fault for being too heavy, go figure that out!

The rest of the trip went alright and she was happy that 2 Kiwis in their group jammed their brakes on too hard and went over the handlebars into to tarmac. I’m guessing that if they’d had a heavy bag behind them ( something like the weight of Genelle’s) then they would have been weighted correctly and not crashed.

She shows bravery and we wander along the Seine looking for a sports shop I first bought a polo shirt 10 years ago when we met up with Dale and Carol Murray in Paris one afternoon, but sadly the shop is gone, I was last there 2 years ago, but it looks like it’s been replaced by a scooter hire place or a souvenir shop. So a late lunch beckons.

We sit in a little bar/ cafe, order some food and drinks, and while away an hour or so, the food is slow coming but good when it does finally arrive. We wander up through the alleys of St Germaine du Prix, up the hill, around via the Pantheon, down the hill, up Rue Monge and back to Rue de Ecole where we are housed. Marks got his new room thanks to the Navigators negotiations and harsh looks this morning, it’s a balcony room on the same floor as us, great room, just reward for watching out for his mother today and making sure she didn’t endanger anyone else in the Parisien traffic.

Back at Familia Hotel we rest our feet and ankles before we work out what to do for dinner.

So dinner is decided, we head around the corner up to Rue Monge, opposite Cardinal Lemoine Metro station, the bar/ cafe/ restaurant is called Le Petit Cardinal, the veal is good and I have a board special of fish and a salsa, pepper mix which is delicious, washed down with a Heineken.

We walk through the streets, eventually trying to see if we can get into the Jardin gardens, but they are locked, so we meander towards the sound of music on the banks of the Seine and in amongst the beautiful gardens on the river we find a big group of people salsa dancing, then not far away another group dancing a mix of stuff, then some old time rock and rollers, all very good dancers, hefty praise from a double left footed non dancing invalid. There is a mix of ages, a mix of skin colours, some can really dance and some try hard, it’s wonderful and it’s very safe, well lit with great music. There’s even a live band playing down right on the Seine waters. Apparently this happens every Saturday night over summer and if I’m right this is the last night of summer, I reckon there would be thousands of people. Fantastic!

It’s not far from our hotel, so we wander back in about 10pm with really sore feet, contemplating bed.

Tomorrow is the Palace of Versailles and then back to check out Napoleons tomb, another busy day, but I feel Monday is going to be a bit of a quieter day for us.

Must remember to call Dad for Fathers Day tomorrow. 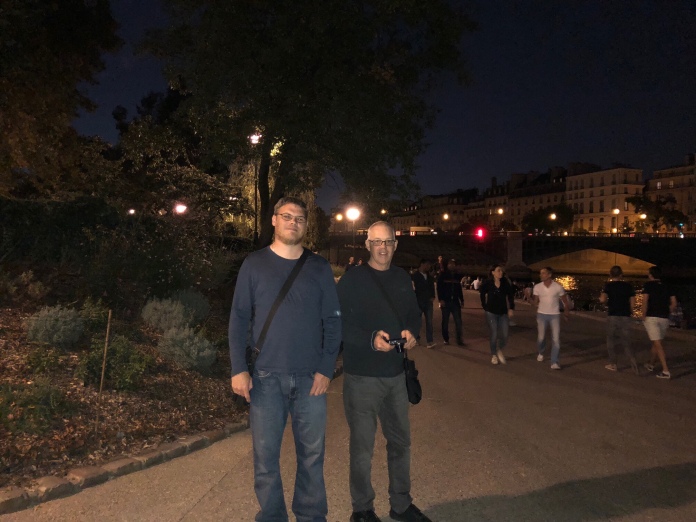