A walk down the the Liffey to do the traditional spreading of Tim’s ashes off the old bridge, Genelle and Mark do the honours. We now travel with a little container of Tim’s ashes and when there is an opportunity and water, mostly water, we leave a little pinch of ashes so that he travels the world with us in spirit. It’s always part of our travels these days.

The quick walk through the Temple Bar back to Blooms, a quick Checkout and the cab we ordered has arrived. We’re ready to leave, head to the airport, pick up out rental car and head to Belfast. Not a bad jalopy, a Peugeot wagon is what we end up with, very comfy. WFirst stop is going to be Drogheda, site of the Battle of the Boyne and the ancient mound tomb of Newrange, it’s 5,000 years old and a World Heritage site. All up there are about 40 mounds that make up Bru’ Na Boinne. Not far away is the Battle field of The Battle of the Boyne in 1690 where William of Orange ( a Dutchman) who married Mary II and James II (deposed as King of England) had a serious scrap over who might have a chance for the English throne.

The stone hallway and central cavern of the burial mound are very interesting, but not enough to keep us so we move on towards Belfast, more stuff to do. The M1 motorway is a dual lane road with 115kph limit mostly, which the Peugeot does easily. The gps gets us into central Belfast but then the difficult part of trying to find the hotel and car park, lots of advice from the backseat – there’s a saying that fits this but I just can’t think of it – something about immovable objects, anyway the advice is not practical and not taken, we do find the car park and the hotel but it means a few laps around one building risking arrest for contravening “No Right Turn” signs and cutting across lanes in a major way. The IRA and the Provos’s don’t detect the illegal activity and we’re safely in the hotel.

We take a punt and get the hotel to get us a Black Top Cab, he turns up in no time, Stevie is his name, a slightly built, short grey hair, swarthy skinned, with an ear ring, a very Irish looking chap, he’s part of Cab Tours Belfast ( phone 07713 640 647 http://www.cabtoursbelfast.com) £15 per person for 1 1/2 hour political tour of Belfast. This turns out to be a well spent 15 quid, he’s fantastic, a real character and you really struggle to work out whether he’s Catholic or Protestant, we have to wait until the end to have a guess and see if we’re right. The Shankill is the Protestant and Loyallist area, it’s just after the marching season so there are Union Jacks and other flags everywhere. The mural have been updated and this time Genelle doesn’t get hit up by kids to hand her mobile phone over. It’s a poor working class area, council estates, small houses, it feels bleak. The Peace Wall is still the same, lots of murals, gates that still get shut at 6 at night, all to keep the Catholics and Protestants apart, even now there are still riots if the kids find a chance to burn or stone something. The Catholic side is similar but has a different feel, the murals are about the hunger strikers, Bobby Sands, the Bombay Street riots and its sort of sobering how recent it all is and still feels. Steve shows us the rubber bullets the British fired at rioters, they are the size of a small can of deodorant, hard as the rubber in a truck type, they are meant to be fired at nobody closer that 40 metres.

At the end Stevie asks us to guess what he is, I go Catholic and explain my reasons, Genelle goes Protestant, and Mark Catholic. He tells us he’s Catholic, the signs are his wedding ring with Celtic design and an emblem on a chain around his neck that says ” Ireland Forever”. But he was also part of “activities” he was shot with a rubber bullet when spearing a metal rod at a British Army tank – documented in a photograph in the press. These days he started the company that has 4 partners 2 Catholics, 2 Protestants , he lives in a non sectarian area, sends his kids to non segregated schools, he believes little bit by little bit things are getting better but it needs people to move on.

Dinner is at the hotel, a pizza, a drink and then a rest, ready for a new day. Our feet and ankles are swollen and despite a co traveller’s concerns that we aren’t doing enough I close my eyes, take a deep breath and say nothing, hoping that sleep will come quickly. 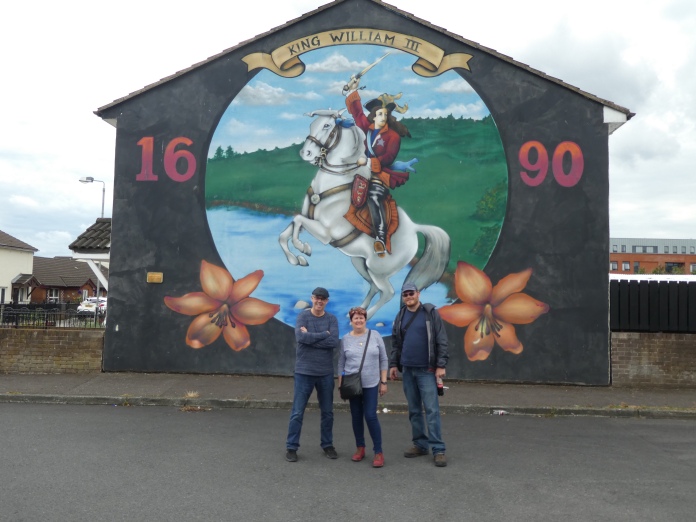 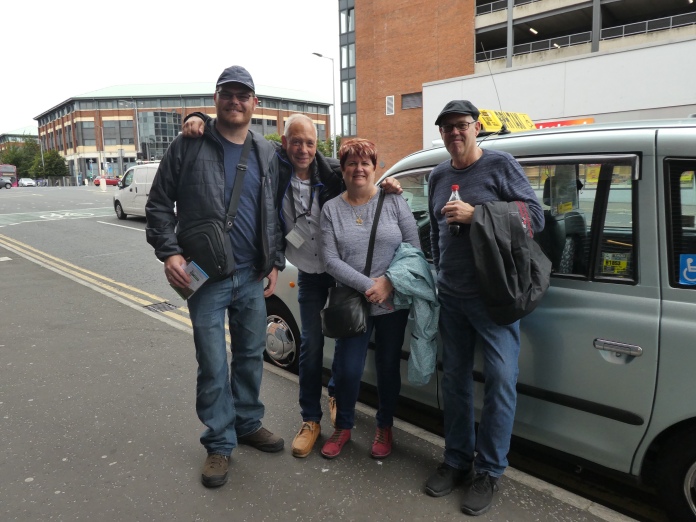 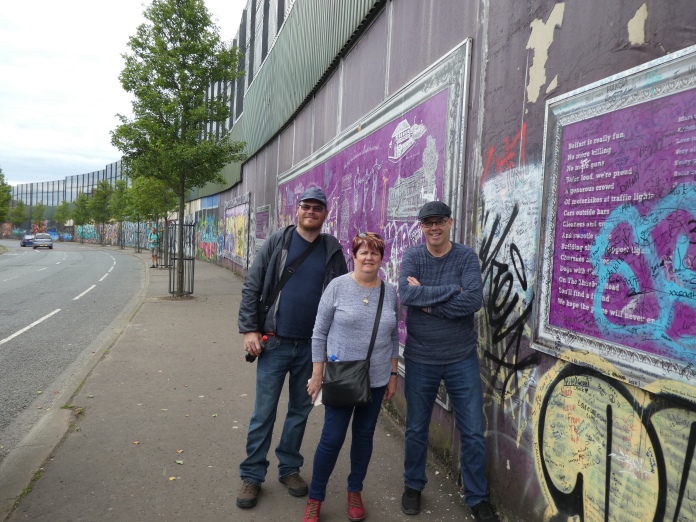 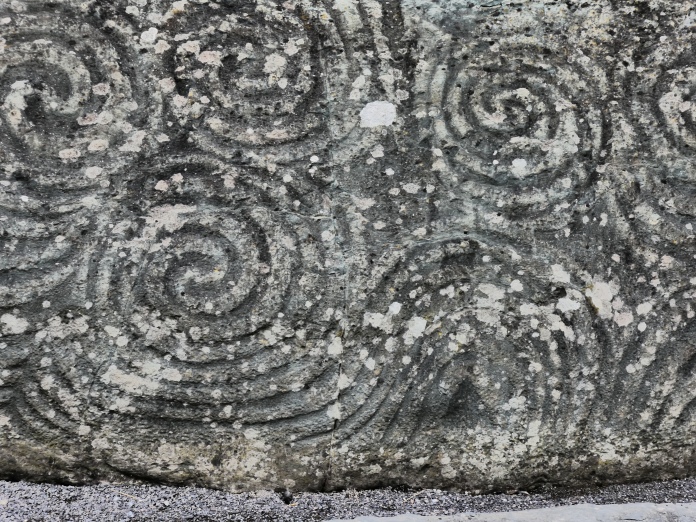 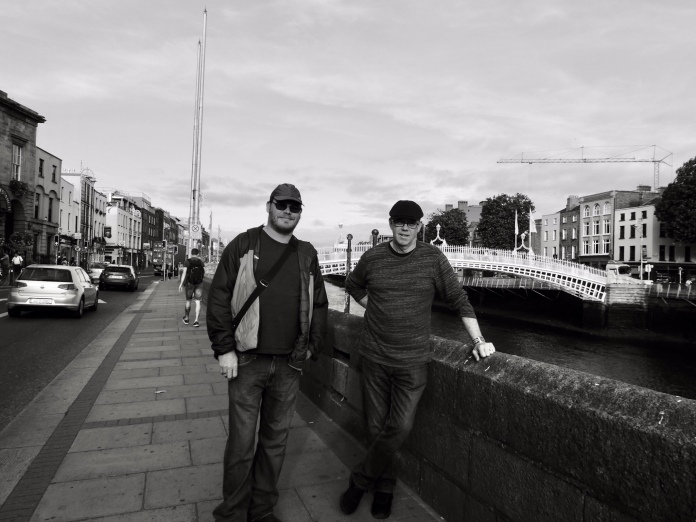 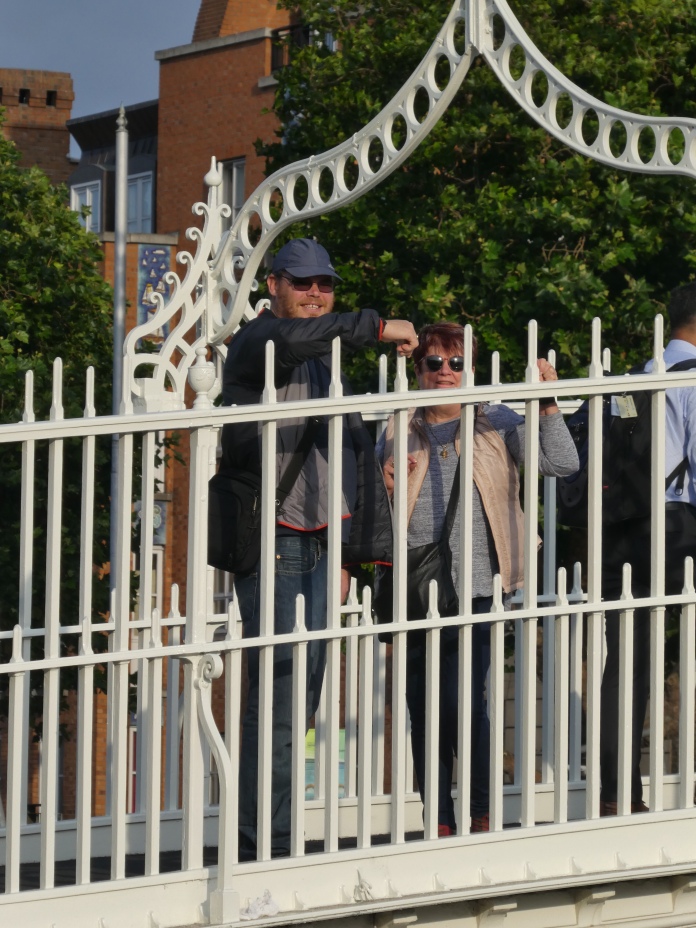