Apologies, I missed posting the blog last night, lots of food, a lot of walking, a lot of pain in the knees, a lot of pain killers and a little bit of alcohol, which sounds like but an artists stimulant for creativity but I just wanted to go to sleep. Poor form but old age and experience means I decide that sleep takes priority.﻿

Its an early breakfast, 8am for a 9am start on the road. Francesco is taking us on a tour of San Gimignano and Siena, I think it was going to include a lunch on a farm at a villa but somebody else preferred a bit extra time in Siena so that’s what we’re doing. ﻿

The bus is on time, we’re off and racing down the hill, via the skinny road, hoping it’s a one way Street and that no other vehicle is going to come the opposite way around a corner, I can see a few felllow travellers holding on to the grab handles tightly. A quick fuel up in Camucia at 1.36 Euro per litre, a bit more reasonable than I thought but still more expensive than Australia. The drive north to San Gimignano is typical Tuscany, rolling hills, a lot of it ploughed up ready for sowing crops, drainage channels, green forests, hill top forts and towns, some of them just normal commercial towns with unspectacular buildings, but clearly there is a commercial imperative. One area we drive through appears to be a motor home manufacturing area, and there is one area which looks like the aitalian version of a caravan park with motor homes lined up side by side in long rows, not something that looks very appealing to me. The banter in the bus is challenging for John and Sonya with comments from everyone about Johns Tuscan garden he plans in Dubbo which involves pencil pines. There appears to have been a breakthrough in the peace negotiations and a detente has been reached whereby Sonya has agreed to the pencil pines, reluctantly it looks but none the less and agreement. Each one of us offers an opinion, met with rolling eyes 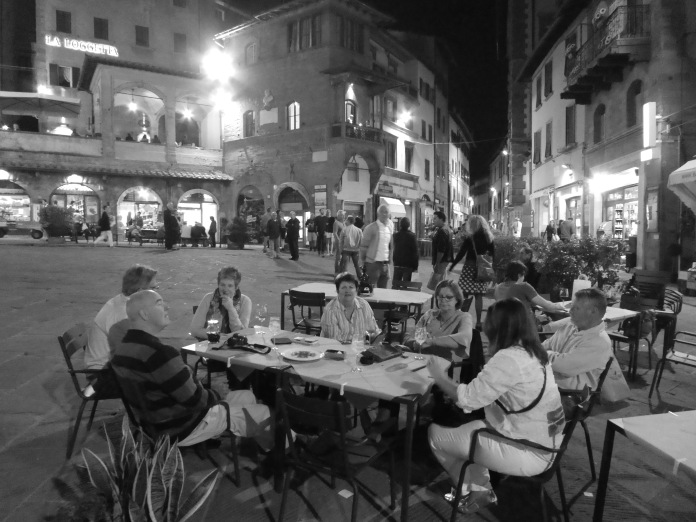 from either John or Sonya. The atmosphere is tense, it’s taken the pressure off some other issues that have been bubbling away such as the plans for the rest of the week, the location of Frances Mayes “Under Tuscan Sun” house, the best time to get another one of the foot and leg massages,all issues of significance. Francesco is a little disappointed that we have opted for extra time in Siena and not having lunch at a farm so it seems.﻿﻿﻿﻿

After about 1 1/2 hours we reach the outside wall of San Gimagnano, a hill town renowned for the number of towers which is a sign of wealth and the defensibility of a town in more violent and dangerous times . We walka up the hill and immediately I’m feeling disappointed, the crowds of tourists on day tours  from Florence and other close by towns is a put off, there is a beggar who asks for a Euro in a quiet alley way, the market stalls are a mix of rayon and polyester scarves and expensive woolen ﻿scarves, leather bits and pieces, gellato shops and expensive designer fashion. Cortona is a quiet haven of authenticity compared to this place and I am now much more appreciative of our decision to base ourselves in Cortona. The bonus of San Gimagnano is that the view from the walls is a really typical Tuscan scene, rows of vines, pencil pines, bales of hay in green and yellow fields with a backdrop of hazy rolling hills – relaxing and takes the breath away at the same time. We have all ended up doing our own thing but we all finish the walk with a gelato.

The next stop is Siena, a place we drove to in 2011, and in fact the day we arrived in Cortona is 6 years ago tomorrow. It seems like an eon ago because so much has happened for the Reid’s in the 6 years. Francesco drops us near the stadium that we parked at in 2011 and using the tower on the Campo we wander into the centre of Sienna through the laneways. There are tourists but not like San Gimagnano, and I think we’re all feeling a little better about this place. The first sight of the tower in the Campo where the famous Palio horse race is held sort of takes your breath away, this huge open space, with  what you can make out as the race track around the Piazza that gets covered in sand for race day, crowds of locals, the obvious tourists blending into the scenery that has been in hundreds of movies.

We sit down at a restaurant for a few beers, some bruschetta ( pronounced brewsketta not the way you hear it in Australia Brewshetta which I think means something else not that nice). Genelle and I drizzle olive oil over the beautiful tasty local tomatoes on the toasted bread, Andrew has another dish that looks tasty ( can’t recall what it was) and we wash it down with Peroni. We then walk around to the Duomo, a spectacular white and black marble building with golden pictures at the top of the building. This is supposed to be the resting place for the bones of John the Baptist, not sure of the details but we invest in the entry fee and take a tour. The marble floors in the church are exquisite, they are inlaid with different coloured marble for patters, sculpted for pictures and some areas a closed off as I think they are crypts. The decoration and the dome are magnificent. Outside there is a sculpture of Romulus and Remus, I’m unsure what this means as they are associated with the foundation of Rome, not sure how they fit in here. A 50c E toilet break in the Duomo shop is a welcome break, pressure off the bladder helps focus on what we see around us.

It’s a long walk for me oncreaking knees back to the bus, and we arrive just in time for the agreed rendezvous at 5 pm.

And hour and a half drive has us back in Cortona, a bit weary but wondering where John and Sonya have us organised for tonight’s dinner. A short break for a shower, then drinks at Maladetti’s where we meet most evenings for a drink and then we are ushered down Via Guelfa to Preludia Ristorante ﻿( hope I got that right).

The plates on the table immediately impress us, they are Versace ( we find out later are 350 Euros each), and then the food impresses us more. It is serious food, presented beautifully, the waiter really knows his stuff and we are left full, and thinking of the delicious flavours that have just been presented to us. Some new challenges have been met, Jane has venison, the first time she has eaten deer, and when being accused of eating “Bambi”, we are hit with the response of Sai la vie (sic) which our linguistic expert interprets as ” get stuffed you peasants”. We aren’t offended, as it’s time to focus on dessert and the dessert wine. Bellissimo, an absolute treat tonight and a great choice for dinner, it’s not a competition but as atop end meal it’s going to be hard to beat.

Tomorrow it’s a late breakfast, a rest and recuperation day for some and walking for others. I reckon the trip to Florence is not happening.

Not much in the way of sarcasm, innuendo or wit that wounds that I can offer today. Painful knees and painkillers cloud the mind and numb the gene that controls this part of my brain. The knee replacement planned for early next year is now something that I’m forced to now confront as a no option option.